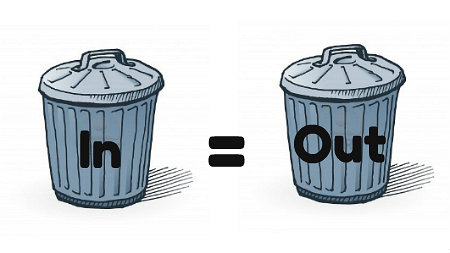 Garbage in = garbage out, is a term often used when programming computers.  What if we looked at our brains like computers and acknowledged that we picked up some garbage along the way? By the time we are seven years old, we are pretty well programmed by the people who raised us, siblings, teachers, peers, religious organizations, television and society.

Think about the negative statements, judgments, rules and values that you were brought up with during childhood. You were too young to choose these, yet they became your primary programming for adulthood. Here are a few questions to show how “garbage in” produces “garbage out.” Are you kind to yourself?  Caught up in perfection? Tolerant of other’s mistakes?

As adults, we can begin to empty the garbage from our brains by becoming aware of the negative self-talk, fears, and self-defeating beliefs and habits that don’t serve us.  Thank them for being there and release them.  It’s time to take out the trash and let them go.  Make space for new ways of being towards yourself and others, with kindness and compassion.